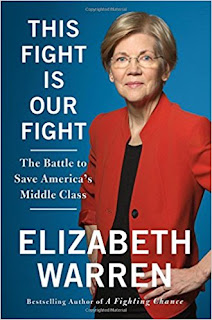 On a sunny weekday afternoon while I glimpse part of Elizabeth Warren's new release book,
This Fight is Our Fight

I smiled seeing page 261 on the fight ahead when she talked about Gina getting fired . Walmart's recent changes on hiring more part time workers and saving money by not paying benefits with part time workers.


San Francisco, CA my second home after Portland, Oregon is such a good city example on this topic. San Fran as people call it is one of the most expensive cities in America to live at. It is the counterpart of New York at the West. Recently, housing cost has even surpassed New York's prices on buying a house. A typical Single detached two bedroom house back in the Pacific Northwest if your really good in hunting would have cost $420,000 to $610,000. In San Francisco, you'll be able to afford a car parking lot for this amount. A typical studio condo in the city of San Francisco, your lucky if you buy it for $900,000.

Hence, a lot of the millennial population are working for the Silicon Valley Tech companies which some of them have offices and presence in the heart of the city.  Come the baby boomers and in between it and the millennium generations either working in retail, hospitality and service industries.
The reality is that this part of the city population are considered low income due to the mentioned high cost of living, high rents, expensive food, etc., The Housing and Urban Development a few days ago labelled a family of 4 earning $100,000 in San Francisco is now on the low income bracket. The other reality is that this so called part time jobs on retail, hospitality, restaurants, services are mostly minimum wage jobs. Thank God in 2014 that the City of San Francisco enabled several laws protecting the rights of people that live and work in San Francisco mostly affecting this said population. The city enabled a Retail Workers Bill of Rights, an accrued paid sick time law after 30 hours of work in a calendar year after 2007 and of course worked to increase the minimum wage compared for the State minimum wage.

The State of California over the last few years has been working on misclassification cases of workers from 1099 Independent Contractors to W2 employees which is a common exploitation especially in the SF Bay Area. Overtime and meal breaks are a major chunk of the abuse.

So as I decipher this book and looking at both the Democrats and Republicans, what initiatives do we really need on federal and legislative levels of government, what measures do we look into connecting the present living conditions and the initiatives already undertaken on the city level?

The income divide is so great that we indeed have to work on having an affordable living situation to the grassroots minimum wage earner.

So the challenge indeed with the incumbent Commander in Chief's "Making America Great Again" is that is it the glamour part of making it great or will it be going to the city levels of government and reaching out directly with minimum wage earners on what resources they need to live and work in America.

Posted by Alex Esguerra at 4:48 PM No comments:

Email ThisBlogThis!Share to TwitterShare to FacebookShare to Pinterest
Labels: Alex Esguerra, Donald Trump, Elizabeth Warren, Minimum Wage, Paid Sick Time Law, Retail Workers Bill of Rights, Saving America's Middle Class, This Fight is our fight, Walmart
Alex Esguerra
We are what we believe and what we do

While starting my Sunday reading the,
New York Times on 59 Missiles and Foreign Policy
reminds me of the years following through the various travails of different political administrations, the news media and current events.

Reminiscing back a few months prior to the November 2016 Presidential elections in the few times I've overhead topics being discussed by both Hillary and Donald, I've sort of expected today as forthcoming when regards to Foreign Policy. While I do recognize the deeper thought on putting America first and focusing more domestically, never in the history of the world that Foreign diplomacy and policy has been put aside considerably as what the initial speeches stated.  Given the recent developments in Syria, the chemical attack and the missiles deployment, admittedly brings the realization for the new commander in chief that there's no such thing as domestic focused Foreign Diplomacy and Policy.

The Obama administration for sure had deliberated on the same type of missile firing yet only went that far with sanctions and over involvement in foreign diplomacy. Contrary to what this new president thought about Obama's too much involvement with Syria he had to use military force to retaliate. Exercising military force is another discussion point but the shift now has tremendously change on vital importance of Foreign diplomacy as a leading World Power.

Now the whole world watches as to what will be the next steps to the current scenario on Syria, maybe to the  extent of finally ousting President Assad of Syria now that Generals are back in the core of the Inner Security Council planning strategies together with the president. Hence with these deliberations on security goes hand in hand with foreign policy strategy recommendations needed which this president might exercise or not.

So I'm going to end this short blog with Richard Haass latest bestselling book, A World in Disarray where he writes about  "The United States remains the world’s strongest country, but American foreign policy has at times made matters worse, both by what the U.S. has done and by what it has failed to do.
As Richard Haass explains, the election of Donald Trump and the unexpected vote for “Brexit” signals that many in modern democracies reject important aspects of globalization, including borders open to trade and immigrants."

Posted by Alex Esguerra at 2:14 PM No comments:

Email ThisBlogThis!Share to TwitterShare to FacebookShare to Pinterest
Labels: A World in Disarray, Affordable books on line, Alex Esguerra, American Foreign Policy, Hillary Clinton, Obama Administration, Richard Haass, Trump Administration
Alex Esguerra
We are what we believe and what we do
Newer Posts Older Posts Home
Subscribe to: Posts (Atom)