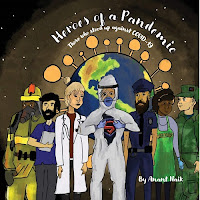 Heroes of a Pandemic is a good start on writing personal histories and experiences on this pandemic called Corona virus. I'll link this together with Differential Effects of Intervention Timing on COVID-19 Spread in the United States This study gives weight to one theory — and cautions against reopening the country without adequate ability to control new outbreaks. Researchers said 54,000 deaths could have been prevented in the U.S. had states implemented social-distancing guidelines earlier. And they warn tens of thousands more could perish as the country begins to reopen.
January 2020 news started to spread over the Corona virus in different context in the US. In San Francisco's bustling convention business for example, The Fancy Food Show, Intersolar-Photonics conferences that month had shown signs on the impact of conference attendees and exhibitors. Exhibition halls were drastically getting changed real time as show management had to fill and move exhibitors around. The issue that time was International Exhibitors like from China, Korea, Germany, the UK called off last minute that the shows had empty booths.
Mid February 2020, San Francisco's big RSA Security conference took a toll when traditionally the long lines in Registration didn't turn out all these years. The Mayor of San Francisco, London Breed declares an Emergency for the City, the first one which raise eyebrows in all facets. Today, this step in history will be recorded as the first intervention which we could have turn the alarms as a nation. Kudos to San Francisco having suffered all the disparities of HIV and the 1918 pandemic notwithstanding economics to the most vulnerable that will eradicate a big part of the city's population if the tides were turned and it became the epi-center like New York.
Social distancing as the best intimidation for this virus then and now is a huge challenge to a bustling metropolitan cities like San Francisco and New York where everyone takes public transit, walks to work. San Francisco's huge housing problem and disparity having so many homeless and SRO's added to the low income minorities sharing an a one bedroom apartment with 4 people. So in March, San Francisco's mayor realized the nightmare at hand and again San Francisco became the first city to order a "Shelter in Place". This followed with 6 cities establishing a county effort and which immediately followed by Gavin Newsome, declaring the State of California to have a shelter in place order.
These efforts where culminated with the Heroes on our public health sector, the epidemiologist, the scientist, immunologist science and data. As Governor Newsome of California mentioned the state is also blessed having some of the most advanced teaching hospitals and laboratories which is now heavily involved in the finding the cure and testing.
In March, a week and a half after the shelter in place order, with reservations I rode the bus. In pre-pandemic days the underground muni was the best method moving around the downtown area. The underground as a preventive measure after an operator turn positive for covid-19. Where I took the bus, there was an ambassador to ensure social distancing. Boarding was only through the rear side, I tried just to stand but concerned I might slip and fall standing and not trying to hold a rail, I took out a cleaning wipes for s chair and sat down. Half-way people had mask and where trying to distance. Another stop came the influx of vulnerable population, no mask standing and sitting. As we also know some of the city's vulnerable suffered on mental health challenges, so the way San Franciscan's deal with them is just let them have their own space.
I went down on Market Street's Union Square shopping area with the plywood panels on Gap, Levis, etc., This Monday San Francisco finally allowed curbside pickup and delivery for retail stores. The Mayor says she is planning on Phase 2B in 2 weeks time.

Researchers expected to see a surge in new cases and deaths spiking in early to mid-June, even if social-distancing measures are put back into place. Even a one-week delay in reinstating social distancing could result in another 23,000 deaths by July 1. The Bay area and California did an aggressive step on the onset beginning with it's tech companies having their employees work from home even before there was a shelter in place program. This made a huge difference in mitigating as otherwise it would have been the epi=center.

The first days were crucial. “During the initial growth of a pandemic, infections increase exponentially. As a consequence, early intervention and fast response are critical,” the researchers wrote.A report in The New York Times, citing the analysis said that if the US had begun locking down cities and limiting social contact on March 1, two weeks earlier than when most people started staying indoors, about 83 per cent of the people who died so far from the virus could have been saved.

This is the part where historians are now looks like debating on writing history for the history books timeline and analysis. Presidential historians will have to make a fact finding aside from the TV clips on how the administration handed this pandemic since it's first reported case in the State of Washington. As preliminary reports come up it even narrates that the first case originated from the bay area. Density and contamination are culprits in exposure. The question now lies on what happens should be be a rise on cases and deaths again since the 50 states have now reopened.

More to come in writing this personal history series on Covid-19. Stay safe. Social distance and wear a mask to save someone.