Where do We Go From Here to Heal, Move and Rise Mr. President Elect 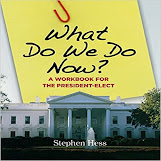 This unique and daunting process always involves at least some mistakes—in hiring, perhaps, or in policy priorities, or organizational design. Early blunders can carry serious consequences well into a president's term; minimizing them from the outset is critical. In What Do We Do Now? Stephen Hess draws from his long experience as a White House staffer and presidential adviser to show what can be done to make presidential transitions go smoothly. Here is a workbook to guide future chief executives, decision by decision, through the minefield of transition.

I start with this as in the most recent transition in 2016 was a very good example of the failures right from the start of the transition process. This transition is the most consequential and historical one in our lifetime considering the dynamics, demographics and show of election results in the last 2 nights in our elections. From the Miami Cuban and Puerto Rican  Conservative Latinos in Florida citizens fearing  of socialism, to the new Mexican Latinos in Arizona from California more Liberal, to the African American voter turn out's in Georgia and Texas. Another good point to note is on top of the voter's list is a recognition of the racial divide which is now well showcase on how the results of this elections has come to a divided House and Senate.

Whatever the results of the presidential vote on Nov. 3, the time between Election Day and Inauguration Day seems set to be a dark and terrifying 11 weeks in the history of the United States. However, perhaps there’s some comfort to be taken in the fact that we’ve experienced fraught transitions before—and longer ones. To wit: When Abraham Lincoln won the election of 1860 and prepared to take the reins from James Buchanan, who had kept a promise he made in his inaugural address not run for a second term, we suffered through a four-month slog of turmoil, because until the passage of the 20th Amendment in 1933, inaugurations used to take place in March. And during Buchanan’s endless lame-duck period, quite a bit went down: Seven states declared for secession, and Southerners seized forts and garrisons, arming themselves for the war we know now was coming.    Quote from

As we go through the final hours of the last remaining electoral college numbers to get to 270 to solidify our Mr. President Elect, as a nation we should start lowering the temperature and shifting the message to  We should praise whoever concedes as that would make it so much easier to heal and to transition. We should also remember Covid-19 had just reach 100,000 cases. We have to get back to solving the problems on Covid-19 and the stimulus as January 21 is still months from now. Meanwhile, people are sick, cannot pay bills and rent so the sooner a transition gets to work the better while the current administration works on the stimulus.

Posted by Alex Esguerra at 9:27 PM