Life moving forward 2020, a new hope out of the a year of the Covid-19 Pandemic 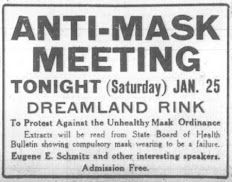 San Francisco, Ca 4 hours before the clock ticks to 2021 where the shelter in place is about to expire on Monday just got extended indefinitely in lieu of the looming crisis in the State's almost out of ICU beds. Meanwhile, local authorities has been vocally strict tonight on private gatherings that might trigger more unforeseen infections. I had to appreciate watching John Meyer on CNN's special New Year's broadcast while he plays the piano and sings live from LA as replacement of the annual fireworks display at the waterfront at the Embarcadero Pier. I started with the Anti-Masking Meeting photo image courtesy of the  ©newspapers.com/aschultz138 From the San Francisco Chronical, 25th January 1919 to give a little history on "Restricting what people can do is always hotly debated, and the recent debate in the press on the need to wear masks while in public spaces and on public transport is not a modern concern. Historian Samuel Cohen has referred to the ‘anti-mask league’ of San Francisco in early 1919, which gained backing from several thousand people opposed to wearing a mask" https://microbiologysociety.org  As we know all the way back in March San Francisco was the first city to place a shelter in place and tonight out of caution again hence is why it extended it's shelter in place indefinitely until the State's Covid-19 crisis is over. If you are resident of San Francisco or are familiar with the city you understand why SF is indeed highly cautious on this. Notwithstanding on the 1919 history, similar to what Los Angeles is now undergoing, the city is heavily dense with a large homeless population and also a lot of communities of color and minorities. It's like a time bomb in laymen's terms that especially with the new discovered strain of covid-19, when an area like the tenderloin neighborhood area gets hits for example, that alone will already take the whole infrastructure beds of the city's San Francisco General Hospital.

American Crisis, author Gov. Andrew Cuomo ells the riveting story of how he took charge in the fight against COVID-19 as New York became the epicenter of the pandemic, offering hard-won lessons in leadership and his vision for the path forward.

When COVID-19 besieged the United States, New York State emerged as the global “ground zero” for a deadly contagion that threatened the lives and livelihoods of millions. Quickly, Governor Andrew Cuomo provided the leadership to address the threat, becoming the standard-bearer of the organized response the country desperately needed. With infection rates spiking and more people dying every day, the systems and functions necessary to combat the pandemic in New York—and America—did not exist. So Cuomo undertook the impossible. He unified people to rise to the challenge and was relentless in his pursuit of scientific facts and data. He quelled fear while implementing an extraordinary plan for flattening the curve of infection. He and his team worked day and night to protect the people of New York, despite roadblocks presented by a president incapable of leadership and addicted to transactional politics.

Cuomo, did what he had to do but we have to note also that prior to his actions, he did not think that Covid-19 was a problem. When he realized the problem and tackled it, he did his best as much of our state and local leaders. The pandemic response varied from state to state then. In California, for example Gov. Gavin Newsom was the first Governor to install the shelter in place and California had a good success in Spring to Summer of bending the pandemic curve on infections and hospitalizations.

One of the biggest challenge of the pandemic crisis  from acknowledgement, testing to now vaccinations really boils down to a  national body or response. It's been a pin pointing between the Federal and State levels of government. The promised 20 million vaccinations as we end 2020 was only 2 million. Meanwhile Astra-Zeneca's vaccine in the Uk just got approved and might get the English vaccinated by half of 2021. One of the debatable discussions is that the United Kingdom has a National Health Service.

Looking at the incoming Biden-Harris administration's Covid-19 plan, it talk's about:

Establish and fund a U.S. Public Health Service Reserve Corps to activate former Public Health Service Commissioned Corps officers to expand medical and public health capacity. By creating the Reserve Corps, we will have a larger team of health professionals to deploy across the nation to help train health care systems in detection and response, educate the public, provide direct patient care as needed, and support the public health infrastructure in communities that are often under-resourced and struggling.

Looking at this plan, I found the paid sick leave for Covid-19 where California's paid sick leave tax incentive for employers expires tonight when the clock ticks to 2021.

The Biden Plan calls for an emergency paid leave program that will ensure that all workers can take paid leave during the COVID-19 crisis. It calls for passage of the Healthy Families Act with the addition of an emergency plan that will require 14 days of paid leave for those who are sick, exposed, or subject to quarantines—while also ensuring that employers will not bear any additional costs for such additional leave in the midst of this crisis.

So let's hope, watch and see moving forward for a new hope this 2021.

Posted by Alex Esguerra at 9:27 PM