I have a dream for freedom and for Anarchy, reflecting on two persons on democracy. 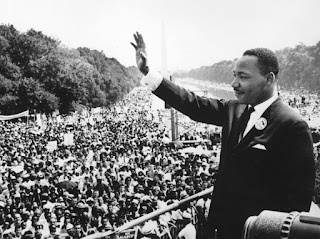 As  we reflect on Dr. Martin Luther King's  message by revisiting his celebrated I Have a Dream speech in its entirety delivered on August 28, 1963, part of the speech says "It is obvious today that America has defaulted on this promissory note in so far as her citizens of color are concerned. Instead of honoring this sacred obligation, America has given the Negro people a bad check, a check which has come back marked insufficient funds".
Another part of the speech continues, "This will be the day when all of God's children will be able to sing with new meaning: My country, 'tis of thee, sweet land of liberty, of thee I sing. Land where my fathers died, land of the pilgrims' pride, from every mountainside, let freedom ring". 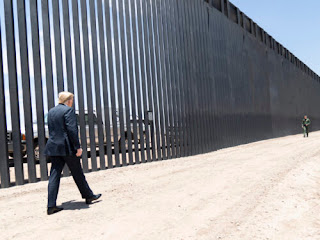 In October 30,2020 ALL NEWS from the White House articles quotes:

Nearly 400 miles of new border wall system is now complete. Just as important, the Trump Administration is prosecuting and deporting violent criminals, stopping the flow of illegal drugs, and closing the loopholes that help human smugglers while hurting our own citizens, including legal immigrants". Illegal immigration hurts everyone. It empowers criminals, bankrolls human smugglers, and fuels transnational gangs. It costs both legal immigrants and U.S. citizens a shot at the American Dream. It endangers law enforcement officers, makes our communities less stable, and puts law-abiding workers and businesses at a disadvantage.

It is the same narrative, today we celebrate the heroism on Dr. King. He started the fight risking his own life for democracy. January 6, 2020 will be read by generations after our life time when the Supreme leader of White Supremacy led an unsuccessful insurrection to democracy and people of color in the United States of America.

This hate extends to the undocumented immigrants mostly on the front lines of the dreaded pandemic a lot of which classified as essential workers. A lot of whom are hard working law abiding, tax paying members of the society who cannot even access unemployment or health care in this country.

I believe that it is the right first direction to tackle an immigration reform in this country to show the insurrects that people of color are here to stay as part of the land of the free, the greatest democracy in the world and they have to accept we cannot be extinct.

No one can compete with American workers when they’re given a fair and level playing field, which has not happened for decades.

President Donald J. Trump   Mr. Trump refers to American workers as White Americans. when he tighten the H1B visa limits and cited everyone else as foreign labor..

From the front line of healthcare doctors, nurses, first responders, essential workers to the technology fields, America's workforce comprises a lot of the so called foreign labor he undermines,

It is imperative that an overhaul of the immigration system and racial justice reckoning be a prime focus of the incoming administration.

I will end continuing on Dr. King's speech, " And when this happens, and when we allow freedom ring, when we let it ring from every village and every hamlet, from every state and every city, we will be able to speed up that day when all of God's children, black men and white men, Jews and Gentiles, Protestants and Catholics, will be able to join hands and sing in the words of the old Negro spiritual: Free at last. Free at last. Thank God almighty, we are free at last".

Posted by Alex Esguerra at 5:10 PM

Email ThisBlogThis!Share to TwitterShare to FacebookShare to Pinterest
Labels: Border Wall, Donald Trump, I Have a Dream, Immigration Reform 2021, Martin Luther King, People of Color, Trump's immigration, White House, White Supremacy
Alex Esguerra
We are what we believe and what we do