Where Do We Go From Here, How Can We Breathe Going Forward in America

As we remember George Floyd's inevitable tragedy, once again it open the discussions buried through the years on racism and equality. If one search for books all related to the topic today, there are hundreds maybe even thousands written though the years. Hence is why it surprising  to hear and see those still on denial or simply lying that there is no systemic racial divide in America.
As the protest marches dwindle or grow today it is clear that people need change. Whether it comes now or may in some time, the key is to ensure that the foundations we need to going forward starts today. The last two days there were significant symbolic gestures like the NASCAR on banning confederate flags, curating the Gone in the Wind movie for now, and moves on some cities about statues being removed. Yet having both experiences in business and politics, I personally have high regards on CEO's and Board Members of important organizations stepping down and giving their cherished sits and positions to African Americans and minorities, If you've been on both sectors like me I know that this move is huge and big as it signifies acknowledgement and affirmative action to do something in respect to the movement.
We also saw the last two days the voting issues in Georgia noting that the majority of the problems came from the marginalized black and minority communities. This shows moreover the continuing disparities that between all races that we need to stay vigilant in this coming November elections if we are indeed for the Black Lives Matter cause. In the midst of a pandemic, it is a known fact that more cases are expected to go up and more deaths. As we all know 46% of these cases and deaths will affect the so called essential workers under privilege low income blacks and minorities. For states that have already started mail in votes it's one way we can support this by sending in ballots way early. Even with the onset of social media and technology, one way to get connected is educating ourselves through word of mouth even local newspapers if they still exist on the real issues we need to focus instead of getting influence by what we see on social media as this is where the paid political advertisements come in notwithstanding how the 2016 elections were infiltrated by foreign adversaries. 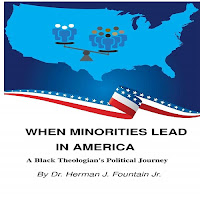 While browsing our book shelf today, I found When Minorities Lead in America. When we look way forward to the future I believe that a  complete healing on racism can culminate when we finally see a lot of minorities in America as leaders in the most important sectors of society. Having had a black president for 8 years cannot fixed the systemic ongoing racial disparities. The 44th President's administration had laid important foundations that needs to be continued as this will be an ongoing process for years as the problem is so deep. And as I've mentioned, we need leaders in business, science, technology, politics and such that are minority led and whom truly understand the plight of the under privileged.  It's easy to say we understand but unless we've been there and gone through the problems itself, we won't really completely understand the problems inherent.
I'm gonna end up this post by quoting from the Black Lives Matter movement website where they posted what they are about.
"

#BlackLivesMatter was founded in 2013 in response to the acquittal of Trayvon Martin’s murderer. Black Lives Matter Foundation, Inc is a global organization in the US, UK, and Canada, whose mission is to eradicate white supremacy and build local power to intervene in violence inflicted on Black communities by the state and vigilantes. By combating and countering acts of violence, creating space for Black imagination and innovation, and centering Black joy, we are winning immediate improvements in our lives.

We are expansive. We are a collective of liberators who believe in an inclusive and spacious movement. We also believe that in order to win and bring as many people with us along the way, we must move beyond the narrow nationalism that is all too prevalent in Black communities. We must ensure we are building a movement that brings all of us to the front.

We affirm the lives of Black queer and trans folks, disabled folks, undocumented folks, folks with records, women, and all Black lives along the gender spectrum. Our network centers those who have been marginalized within Black liberation movements.

We are working for a world where Black lives are no longer systematically targeted for demise.

We affirm our humanity, our contributions to this society, and our resilience in the face of deadly oppression.

The call for Black lives to matter is a rallying cry for ALL Black lives striving for liberation."

Posted by Alex Esguerra at 10:01 AM No comments:

Email ThisBlogThis!Share to TwitterShare to FacebookShare to Pinterest
Labels: 2020 Elections., 44th President, Black Lives Matter, George Floyd, NASCAR, Racism, Rev. Herman Fountain, When Minorities Lead in America
Alex Esguerra
We are what we believe and what we do
Older Posts Home
Subscribe to: Posts (Atom)